My Vinyl Plays 'til My Final Days


My Vinyl Plays 'til My Final Days

Weird Vinyl Editions
Somewhat debunking the myth that we all buy vinyl because the music just sounds better when pressed into virgin black wax, recently a dramatic increase in the number of records being pressed with basically anything that’s to hand – blood, piss, hair, string, leaves, ashes – you name it, if you can mix it into a vat of wax pellets someone’s tried to press it into a record.
Liquid filled records, interactive designs and more unusual vinyl designs: 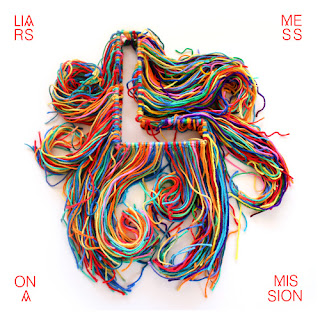 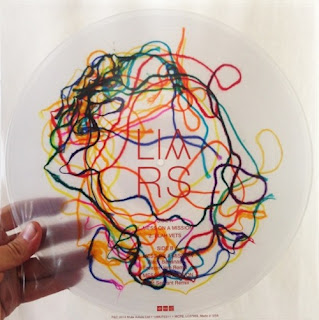 For Record Store Day, Liars dropped a special version of Mess On A Mission, embedding the clear vinyl with string to match the artwork. Liars’ Angus Andrew on string theory: “To us it seemed like such a unique and interesting way to extend the visual language of Mess right inside the music…We talked about the idea for days but weren’t at all sure it could physically be done. After all, pressing bits of coloured string into the actual vinyl was nothing we’d ever heard of before. ” 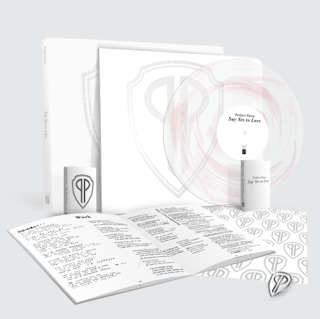 In 2012 Erykah Badu, Chris Martin, and Ke$ha rolled their sleeves up and counted to ten while Wayne Coyne took a sample of the red stuff for Flaming Lips’ ‘Heady Fwends’. But while that was bottled to swill around the record as it spins, Perfect Pussy’s Meredith Graves’ actually had her menstrual blood pressed into the wax itself. Just as well there were only 300 copies made of  Say Yes To Love (Captured Tracks). 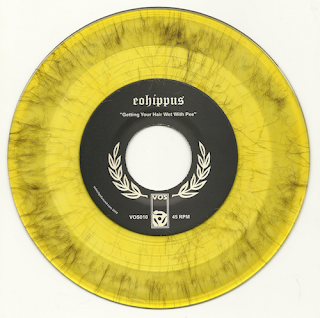 Eohippus - Getting Your Hair Wet With Pee (Velocity of Sound)
There’s no brushing this one off – these guys have literally soaked their vinyl in piss and then for some reason felt the need to make it even more bodily by filling the clear yellow wax with hair. Nice touch guys. No surprise “this unique item lends itself to surface noise and no two singles look or sound alike”. 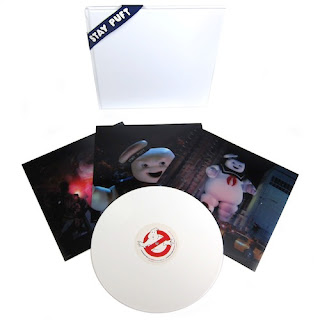 Ghostbusters (30th anniversary ed.) (Legacy)
For the 30th anniversary edition of the Ghostbusters soundtrack, Legacy got so excited by the Marshmallow Man they packaged the release in a puffy sleeve that exhales wafts of sugary synthesis every time you go near it. Great, as long as you don’t mind your record collection smelling like ratty Halloween leftovers. 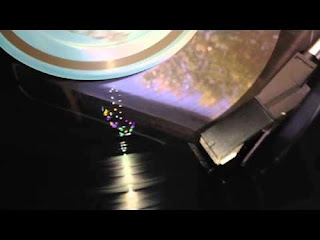 Jack White - Lazaretto (Third Man Records)
The so called Ultra LP, may not have anything actually physically pressed into the wax itself, but its bells and whistles are so extensive we thought we’d throw it in here anyway. Although not pressed into the wax, the idea of a hologram shimmering on the surface of the run out groove is pretty beguiling never mind all the other gimmicks:
- Side A plays from the inside out
- 2 vinyl-only hidden tracks hidden beneath the center labels
- 1 hidden track plays at 78 RPM, one plays at 45 RPM, making this a 3-speed record
- Dual-groove technology: plays an electric or acoustic intro for “Just One Drink”
depending on where needle is dropped. The grooves meet for the body of the song.
- Matte finish on Side B, giving the appearance of an un-played 78 RPM record
- Vinyl pressed in seldom-used flat-edged format
- Both sides end with locked grooves
- Dead wax area on Side A contains a hand-etched hologram by Tristan Duke of Infinity
Light Science, the first of its kind on a vinyl record 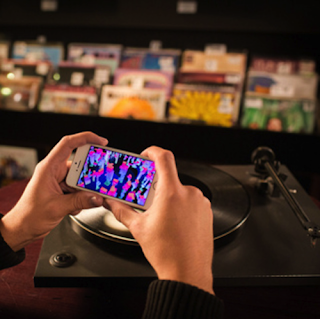 Eno & Hyde - Someday World (Warp)
This smart-phone friendly gimmick from messres Eno & Hyde, where by owners of the album app would be able to witness “outsider architecture metropolises” take shape on their vinyl as it plays, like pixelated petri dishes blossoming with aggressive bacteria. It’s a pretty ambitious coming together of the analogue and the digital. 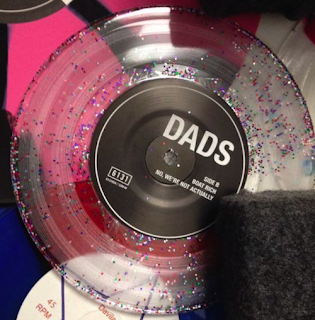 Dads - Pretty Good (6131 Records)
On to its fourth pressing, this Dads release on 6131 has pretty much tested out every colour of vinyl – clear green, opaque pink marble, red with random splatters, pink, you name it. The latest release takes it to the next level, pinching rainbow glitter from the craft store and stuffing it in a clear 7”. Only 100 copies were pressed, but they also dropped 900 in yellow marble to keep the coloured vinyl variations going. 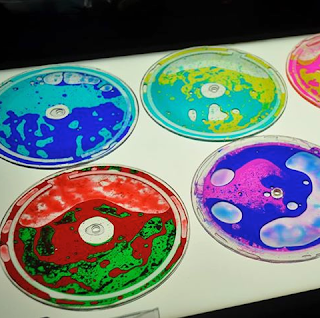 Worthless - Greener Grass (BBiB Records)
Apart from cleaning products, liquids and records are normally a losing combination, but what about liquid IN your records? In what we concede must have been an impressive engineering feat, Beyond Beyond is Beyond have done the unthinkable, mixing liquids and vinyl. We’d be interested to hear how they sound, but only 15 were released and apparently only around half were actually offered for sale although rumours are floating around that a new batch is on the horizon. 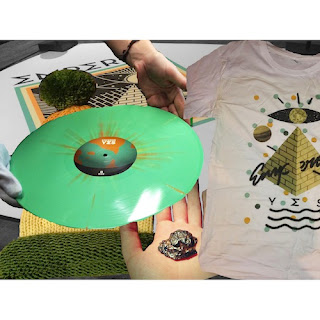 Emperor Yes - An Island Called Earth (Alcopop!)
About as otherworldly as a record gets, the ‘COSMOS’ edition of An Island Called Earth features a run of 100 green/yellow/orange records, containing sprinkled fragments of an asteroid that crashed into earth during the 16th century. Quite literally a piece of history, and indeed interspace geology, in your wax. We give Alcopop! full marks for effort on this one. 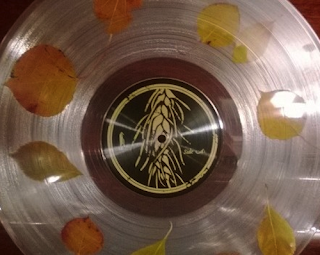 Barren Harvest - Subtle Cruelties (Handmade Birds)
I love it when form pays a little bit of attention to content, and no more so than on Barren Harvest’s Subtle Cruelties, so neatly embossed with russet leaves that shimmer like one of those novelty toilet seats behind crystal clear vinyl. The record’s novelty ‘nature’ is not lost on Thrill Jockeys who issued a manfully honest disclaimer with the release: “be advised that there are noises and irregularities in the audio that differ from record to record”. That’s the beauty of nature, right?
And at last here is the ultimate sacrifice to vinylism:

Pressed in peace;
Cremation company offers to have your ashes memorialised in vinyl
Join your own record collection with And Vinyly’s bespoke funeral service.
Not for cheap, so better start saving now! 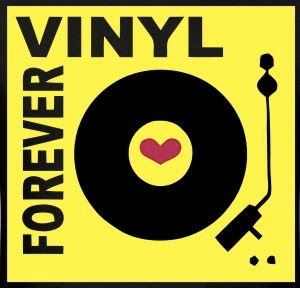 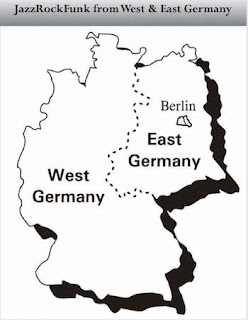 "GROOVIN' AROUND" is broadcast on:

I recommend the following records as source of the tracks I played
as well as for further discoveries:

The Dave Pike Set
- Masterpieces (Compilation)
- Got The Feelin'-1969 US

Achtung!German grooves
20 Instrumental Dancefloor Killers from the 60s and 70s

... and a stack of 45s which came out on the state owned Amiga label in the east.

Listen to the latest episode of my radio show "GROOVIN' AROUND" : Jazz Rock Funk from West & East Germany 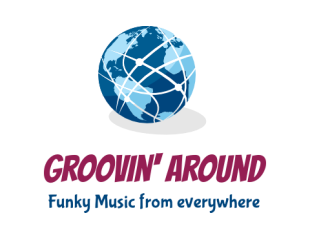 Listen to the latest episode of my radio show
"GROOVIN' AROUND"
dedicated to an historical review of Jazz Rock Funk in
West & East Germany
for the next two weekends from Friday to Sunday
16.00-18.00 GR Time/ 15.00-17.00 Central European Time (CET)/ 14.00-16.00 GMT Time
on Ambush Radio
Direct link:http://ambush-radio.radiojar.com/
You will hear some rare grooves ripped from Vinyl and
funkified "Schlager" (hit songs sung in German),
as well as some cuts of extremely rare Amiga 45s.