The message from Monty Python team read: 'Yesterday we bid a final farewell to our dear Terry Jones ... Not the Messiah, but just a very naughty boy.' 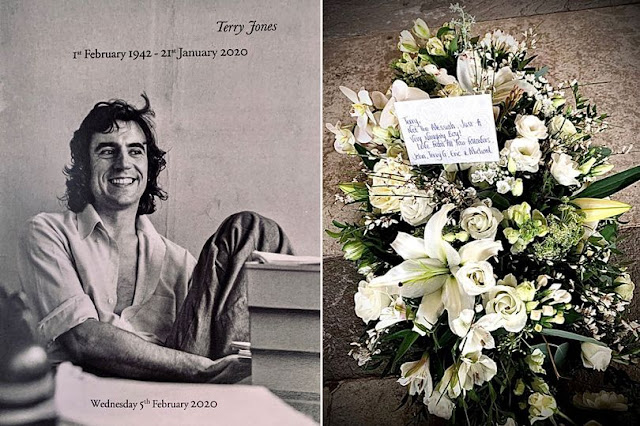 A moving tribute by Michael Palin:

Jones, who died at the age of 77 last month, was brought into the crematorium to the song How Sweet To Be An Idiot, penned by Neil Innes, the Python collaborator who died in December last year.

RIP Neil Innes, the Urban Spaceman has left the planet

This is a tribute to Neil Innes composer, muscian and comedian Neil Innes, who was known and loved by many fans for his work with the Bonzo Dog Doo Dah band, Monty Python as well as spoof band The Rutles, who sadly died at the age of 75 at the end of December 2019. His biggest hit was "I am the Urban Spaceman" with the Bonzo Dog Doo Dah band:
I discovered the Bonzos how they were colloquially called by their fans through Monty Python, which I was obsessed with after I discovered their movies in our local arthouse cinema.
As well as composing well known tunes for the Pythons (like
He appeared in some of their films like here in the hunt for the Holy Grail:
I have seen him 3 times live once solo, withe the Rutles and the reformed Bonzos and his performances were certainly living up to his legendary reputation for being extremely witty, funny and a versatile performer, who had wanted to make the world a better place.
The Rutles - Living In Hope
The Rutles - Get Up And Go

Neil as "Blue Suede Schubert"
..."when I am dead I drop"
Protest Song

Neil Innes - Imitation Song (by Ron Nasty of the Rutles)

Brexit Song “Something to Say”

Find lots of stuff and interviews with Neil at