Team scratch dropping some heavy tunes!
Remember that some said once to me that kittens and records don't mix very well.
Can' t say that of this two. Let's hope it's an old Ted Nugent LP:

After a good scratch session this LP could be recycled for household use: 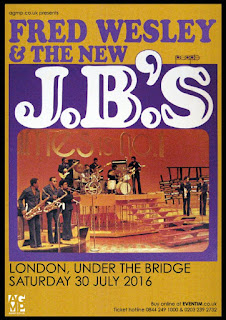 FRED WESLEY & THE NEW JB’S are in town for a funky House Party!

Fred Wesley is the trombonist, composer, arranger, bandleader and author known worldwide as one of the architects of funk music. Fred’s work with the Godfather of Soul, Mr. James Brown in the 1970s established him as the world’s funkiest trombonist. He is also known for his work with George Clinton, Bootsy Collins, Parliament, Funkadelic, Ray Charles, Van Morrison, Cameo & many others.
On Saturday night the audience started to groove while some serious funky classics where tackled by his band of leaders in there own right" as Fred announced them after the first track and the lively crowd at the well filled venue danced right from the first tune through the whole 2hrs set.
As a treat Fred's J.B. band mate Pee Wee Ellis was on stage for a couple of their classics.
"Breaking Bread with your Mama" and "Pass the Peas" & "Funk for your ass"
He was rewarded for his solos with an extensive "Pee Wee, ..." chant by the frenzied crowd which led to a cheering "Fred, Fred, ..." chorus.

Since I have seen him last time in 1998 he has aged a bit, but he was still Blowing his head off in some great solos and singing lead on some of the classic songs.
- June 29, 2017 No comments: