Yeah the bells are jingling around us and it's time for my yearly Xmess round up again.

The Season's Upon Us by the Dropkick Murphys is already a classic:

Stickin' with the punky Irish vibe:


And all those cowboys out there need a little ball as well:

Time to change the vibe slightly:

Of course they're celebratin' in Dancehall as well:

And we shouldn't forget the funky and naughty side of Xmas:

Yeah Santa needs some lovin' too!


This lady has a surprisingly funky Christmas!

Xmas out of this world with Sun Ra:

and the Yo La Tengo cover of  "It's Christmas Time"


The weirdest: Gape Kerkelig (that's what spell check made out of Hape Kerkeling) Merry Christmas

That's it for this year, folks!
And don't forget to enjoy the festive period until new year all you miserable sods out there!

And don't forget to check out my
New Year's post!

Ginger Baker, one of the most innovative and influential drummers in rock music, has died at the age of 80 on Sunday 7/10/2019.  Nicknamed Ginger for his flaming red hair, the musician was born Peter Edward Baker in Lewisham, south London, shortly before World War Two. A co-founder of Cream, he also played with Blind Faith, Hawkwind, Baker Gurvitz Army, Airforce, Fela Kuti and many renown Jazz musicians like Bill Frisell in a long and varied career over 60 years. Away from music, his other passion was initially cycling and later he took up rally driving and developed a love of polo, building up a sizeable collection of ponies, despite his tendency to get injured.
The musician fought osteoarthritis to record his final album, Why?, in 2014. Two years later, he underwent open heart surgery and announced his retirement from touring.
"Just seen doctor… big shock… no more gigs for this old drummer... everything is off," he wrote on his official blog in 2014. "Of all things I never thought it would be my heart."

Ginger Baker has a valuable lesson drummed into him

Riley B. King (September 16, 1925 – May 14, 2015), known professionally as B.B. King (click here for his official youtube channel), was an American singer-songwriter, guitarist, broadcaster and record producer. King introduced a sophisticated style of soloing based on fluid string bending and shimmering vibrato that influenced many later electric blues guitarists. Here are some of his best live dates:

Watch this fantastic concert on iplayer.
The audience was joining in and dancing from the start!

Three-time Grammy Award-winner Angélique Kidjo makes her Proms debut 2019 together with her nine-piece band in a late-night tribute to salsa legend Celia Cruz. Clara Amfo explores the links between the music of Cuban diva, Cruz and the traditional Yoruba music that came to America during the slave trade, and how Kidjo has combined these influences with the west African Afrobeat and juju styles.

The "ART" of Funk, Art Neville is gone!

Worth checking out his early recordings!

The Neville Brothers - Fire On The Bayou 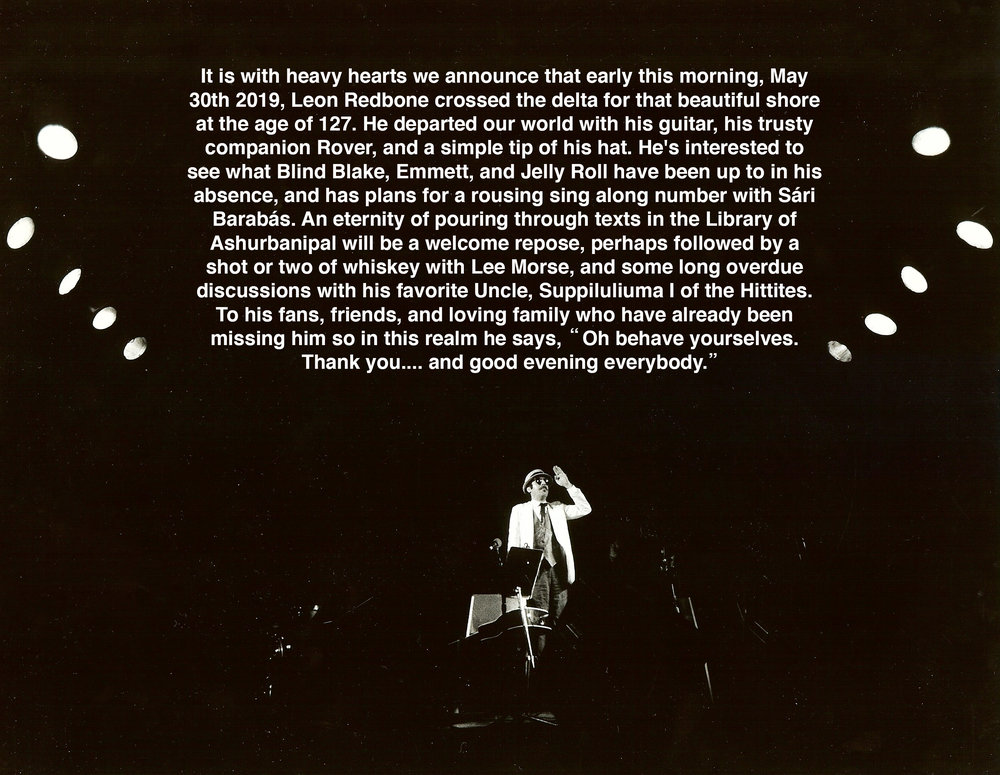 "Please don't talk about me when I'm gone" was one of the many old time songs he presented in his initimable retro style when I saw him live at Pizza Express in Soho many Moons ago and this song ist great epitaph for this unique performer, singer and guitarist, who passed away on May 30th 2019 without great media attention almost unnoticed except by his die hard fans for decades.
"Please don't talk about me when I'm gone" is also the fitting title of a documentary short film featuring him and some of his early associates talking about his enigmatic persona. Watch here:

Not much is known about his personal life except he was born in Cyprus to parents of Armenian descent in  and he immigrated in 1961 with his parents to Canada where he changed his name to Leon Redbone and started his career in the coffee house circuit of Toronto.

So here are some of my favourite interpretations of old time songs:

More on his life and legacy:

Mac Rebenack known to his fans as Dr. John (after his impersonation of the fictitious Dr John the Night Tripper persona ), a true New Orleans music legend, died aged 77 of a heart attack on 6 June 2019. "À re'oir"(Goodbye) Malcolm John Rebennack Jr. and thanks for the music! You'll hopefully jamming with all the other greats up there in Nola heaven. RIP! Here are some of the so many great shows he performed over the years since I discovered Mac in the mid seventies.


Dr. John and Bobby Rush with Blinddog Smokin' -
Another Murder in New Orleans

Such a Night (from Last Waltz)

Blind Boys of Alabama - What
A Wonderful World

Dr. John live at Rockpalast in 1984
This was the first time I  saw him perform a solo show on German TV!

If you wish to know more about the man I recommend his infectious autobiography:
Under a Hoodoo Moon:
The Life of the Night Tripper

Scott Walker, the boundary-pushing artist who made his name as a member of ‘60s pop stars The Walker Brothers, has died aged 76 of cancer. After going solo Walker became infamous for his love of Jacques Brel, the iconoclastic Belgian chanson singer. Long before Marc Almond he sang Brel songs in English. On the Scott  solo albums, supposedly still aimed at his teen fan base, Walker sung Brel’s theatrical songs about venereal diseases, selling opium and laughing from the afterlife at his own funeral.

A short lived reunion of the Walker Brothers in 1975 yielded
No Regrets (UK hit 1976 peaked at No.7)

Influenced by Brel and film music his own compositions, became more and more cinematic.

10 of his best songs


The guitarist Dick Dale, the pioneer of Surf Rock known for his 1962 hit Misirlou, has died aged 81 on March 16, 2019. He was treated for heart failure and kidney failure prior to his death. Another living legend surfed away last week.

Misirlou  (A famous traditional song from the Easter Mediterranean,
which became famous through his use in Tarantino's movie Pulp Fiction)

Dick talks about his beginning

So for all of you who caught the
New Year  Blues
after the festive weeks here is a roundup of the best treatments: